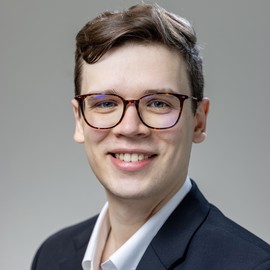 I am a PhD candidate in Political Science in International Relations and Political Methodology at The Ohio State University. In my research, I investigate how preferences influence international bargaining in the context of polarization and great power competition between the United States, China, and Russia. To do so, I bring together two methodological traditions sometimes juxtaposed but seldom integrated: survey experiments and formal (game theoretic and computational) modeling.

I am a founding member and graduate fellow of Ohio State’s Models of Emergent Social Order (MESO) Lab. My research there is supported by the National Science Foundation and the Carnegie Corporation of New York.

I previously held a fellowship with the Mershon Center for International Security Studies and I am also a co-founder of the Korea and the World Podcast.

I can be reached via email at vanbeek.3@osu.edu. 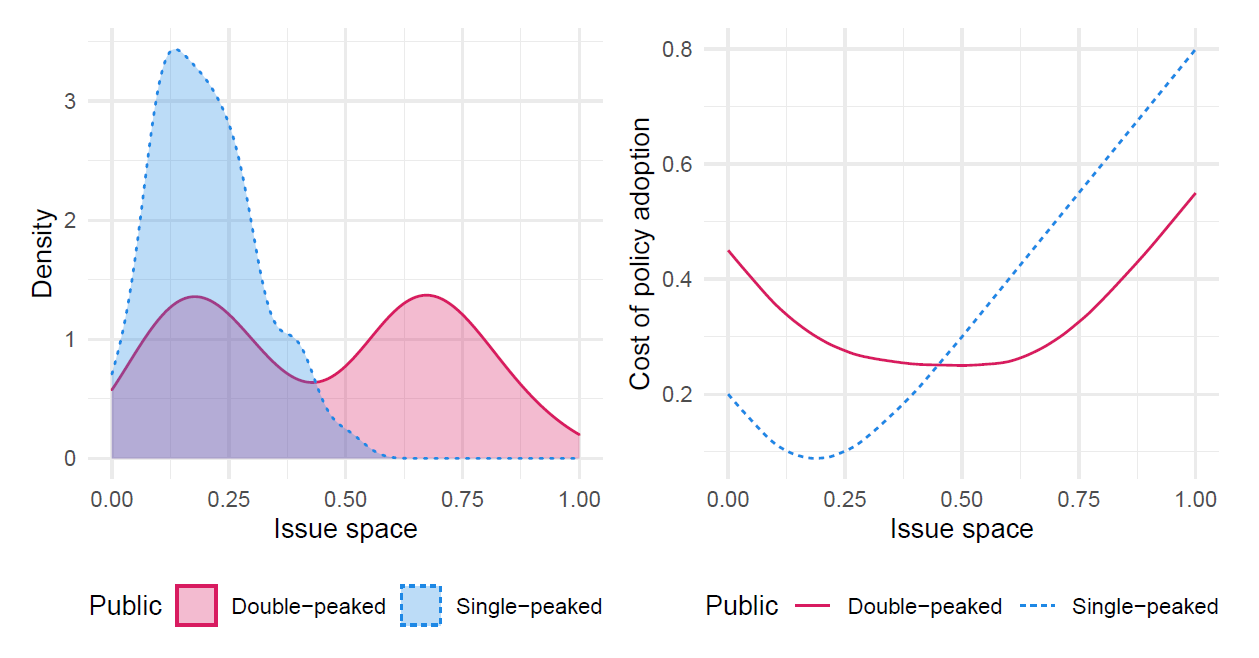 We know remarkably little about the impact of polarization on the ability of leaders to conduct foreign policy. This is a problem for at least two reasons. First, polarization is on the rise, in the U.S. and in other democracies, and foreign actors—such as Russia or China—know as much. Not only do these countries see domestic polarization within Western nations as an opportunity but they are also eager to stoke it. Second, domestic polarization implies a double-peaked (u-shaped) distribution of public preferences that our current models based on median voter approaches cannot account for.

When it comes to domestic politics, the consensus is that polarization harms the policy process and hinders leaders from conducting foreign policy, for example, by fostering extreme policy swings or gridlock. The burgeoning IR scholarship on this topic agrees.

Surprisingly, I find that not only does the polarization of public preferences not undermine a nation’s global aspirations but it may even improve a leader’s bargaining position on the international stage. The intuition is simple: leaders of polarized publics can leverage their public’s preferences to obtain concessions from international partners.

My project develops a unified model of domestic-level preferences, at home and abroad, focused on the strategic incentives different distributions of preferences (polarized versus homogeneous) create for leaders. This model carries important implications beyond polarization: it reconciles the audience costs literature with its critiques; forces us to reconsider the hawkish advantage hypothesis in light of public preferences; and refines our understanding of the selectorate theory. 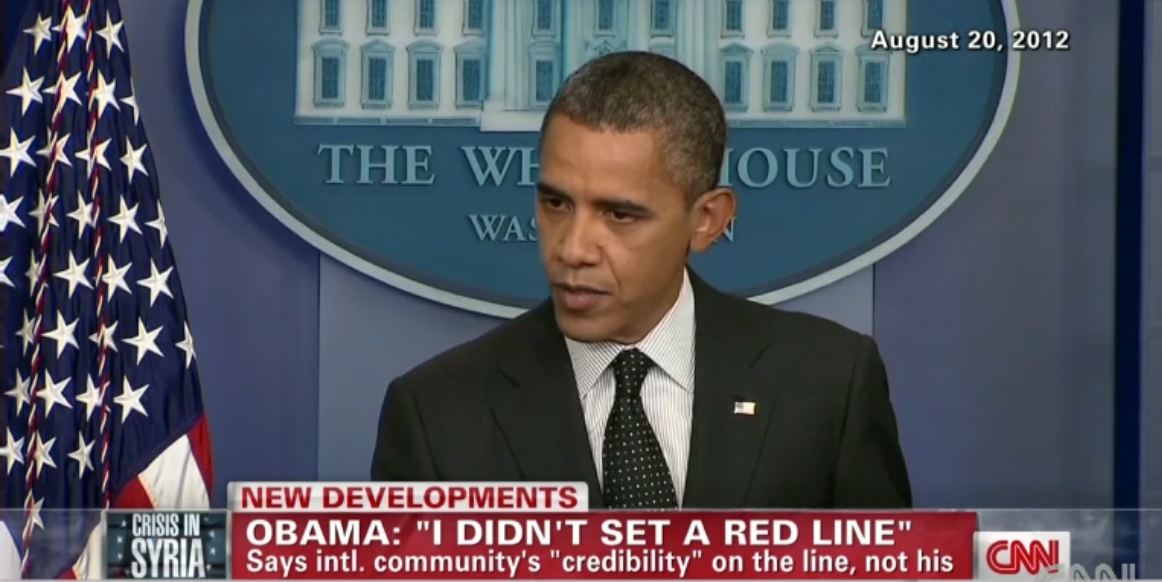 I propose a preference-based theory of audience costs that explains why we should not have expected "Obama's sales pitch on Syria" (CNN) to cause a domestic backlash in the first place.

Students of public opinion and foreign policy know individuals have diverse preferences, yet pragmatism often leads them to abstract these nuances away. Unfortunately, this approach risks obscuring important dynamics. I use audience costs theory – which holds that leaders can tie their hands by issuing public statements since their constituency would punish them for saying one thing but doing another – as case in point. Using a game theoretic model and survey experiments, I propose a theory of audience costs driven by preferences that (1) reproduces the central findings of audience cost theory and reunites it with many of its critiques, (2) reveals how different publics (only hawks, only doves, mixed) shape leader’s strategic incentives, (3) sheds light on new dynamics, explaining when leaders are most credible and why they may decide to lie, and that (4) is neither contingent on the presence of a domestic opposition nor vunerable to executive justifications.

Under review, with Professor Bear Braumoeller and the MESO Lab.

Scholars have written extensively about international order, on the one hand, and war on the other, but surprisingly little work systematically explores the connection between the two. This disconnect is all the more striking given that empirical studies have found a strong relationship between hierarchical international order and international conflict. We provide a generative computational network model that explains hierarchical international order and war as two elements of a larger recursive process: the threat of war drives the formation of hierarchy, which in turn shapes states’ incentives for war. Grounded in canonical theories of hierarchy and war, the model explains an array of known regularities about hierarchical order and conflict. Surprisingly, we also find that many traditional results of the IR literature—including institutional persistence, balancing behavior, and systemic self-regulation—are logically implied by the interplay between hierarchy and war.

Dynamics of Change in International Organizations

Under review, with Professors Verdier and Mette Eilstrup-Sangiovanni.

States face several options when intent on changing an IO: they can reform it or create a successor that assumes all or part of the prior institution’s functions–a practice known as succession. Reform and succession are equally efficient mechanisms of institutional change, yet addressing different negotiating hurdles. While succession allows reformers to sidestep veto players, on whom reform trips, unlike reform, succession suffers from scale suboptimality–not every existing member may join the successor institution. Contingent on which negotiation obstacle prevails, reform is preferred to succession or vice versa. We provide a game-theoretic foundation to this proposition, advance a computational solution, and illustrate with historical examples.

The Trilemma of International Order Cooperation

Existing theories predict that, as China rises, it will want to reshape the rules-based international order led by the United States to its benefit. The current debate centers on three related but distinct questions: Will the United States preserve its influence over the international order? Will the future international order promote the interests of the United States? And will this undertaking be violent or peaceful? However, scholarly works largely address only one or two of these questions at a time. The problem is that their answers are logically connected in what, I argue, constitutes the trilemma of order competition. At the most general level, when powerful states compete over international orders, they are confronted with three typically desirable, yet jingly unattainable, objectives: 1) to maximize their influence over other states while minimizing the cost of order maintenance; 2) to promote an order that promotes a set of interests closely aligned with their own interests; and 3) to reduce the risk of war. The central takeaway is that only two out of the three objectives can be mutually consistent and order-makers must decide which one to give up. I develop a formal model of order competition that highlights the strategic nature of order management: powerful states benefit from having states participate in their order, but the more dissimilar members’ preferences are from the order’s purpose, the costlier it is for powerful states to ensure that member states comply with their obligations. The model both synthesizes and refines many pre-existing theoretical arguments about international orders and conflicts. It also forces us to reconsider the relationship between ideology and conflict.

Warring Leviathans: Conflict Among Hierarchies and the Evolution of Human Prosociality

Working paper, with Professor Bear Braumoeller and the MESO Lab.

The existence of an adversarial Leviathan causes individuals to contribute more to their own Leviathan.

Research into the origins of human prosocial cooperation has suggested a central role for institutions of coercive sanctioning, by which society as a whole can punish those who fail to contribute to collective goods. Less attention, however, has been paid to the conditions under which such institutions emerge and persist over time. We argue that intergroup conflict, by significantly increasing the returns to collective goods, makes the creation of coercive centralized hierarchy more likely, and therefore increases within-group cooperation. Further, we argue that when such institutions are constructed over time rather than all at once, institutions which were built up during conflict can be ex-post efficient even in times of peace and therefore can outlast the conflicts which provided their initial impetus. We develop this argument using a computational model, and validate the results using a networked public goods game experiment. This research has implications for the study of social institutions at a variety of levels, from small societies to states.

Only Doves Could Send Nixon to China: Public Preferences and International Rapprochement

Alliance Management in the Face of Public Opinion: Experimental Evidence from the United States, Japan, and South Korea

strategizeR: An R Package for Simulating and Analyzing International Bargaining

I have been the instructor of record for two different courses at Ohio State: an introductory course on international politics (Global Politics) and an advanced course on the causes of war (International Security and the Causes of War). In the future, I would like to teach new courses on public opinion and the design of survey experiments; international orders; as well as formal and computational modeling.

My teaching emphasizes non-traditional interactive learning (especially simulations and collaborative readings) to transmit the knowledge accumulated by political scientists and ground it in the context of contemporary politics.

My teaching efforts were recognized by the students of Ohio State who selected me to receive the 2020-2021 Outstanding Graduate Associate Teaching Award, the only university-wide teaching award completely administered by students.

This course introduces students to the study of global politics through the lens of International Relations (IR), a sub-discipline of Political Science. As an academic field, IR focuses on the interactions of political actors across nations. In addition to politics, we draw from various field of human knowledge – i.a. economics, psychology, game theory – to answer the important questions that drive world events: What are the causes of war? How do domestic interest groups influence foreign policy? Do democracies behave differently than authoritarian regimes? Why do states seek nuclear weapons? What can be done to prevent their success? Can democracy yield peace? Is the rise of China a threat? Should we fear a nuclear North Korea? Do norms matter and if so, how? What is the role of gender in international politics?

International Security and the Causes of War (PS 4315)

In this course, students learn to read and evaluate the social science literature on the causes of international peace and war. It focuses on both theoretical and empirical works in this area, and introduces a wide variety of research strategies. After reviewing many of the prominent theories of war and peace, students will be encouraged to evaluate their validity and limitations in light of several historical case studies.